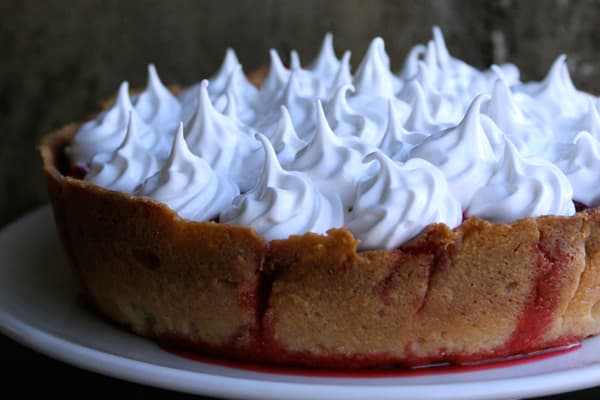 When it comes to looking at food magazines when you are gluten-free, there is nothing more frustrating than gazing at all those gorgeous gourmet images, wishing you could make it. The mere thought of having to blend all those flours your self, and the idea of cooking evaporates with a yawn and a sigh. Until now. Below is a recipe that I saw in Gourmet Traveller and converted to gluten-free.

For the Sweet Short Crust

In a stand mixer with the paddle attachment, combine all the flours, guar gum, salt and sugar and mix until amalgamated. Add the diced butter and mix on the lowest setting until the mixture looks like damp cornmeal.

Add the 2 egg yolks and eggs and turn the mixer on high. Mix until the dough is very thick and sticking to the sides of the bowl and is clinging to the paddle, about 1 -2 minutes.

Using a plastic pastry scraper, turn the dough out onto a counter that has been dusted with glutinous rice flour. Moving quickly, knead the dough into a smooth ball, cover with cellophane and refrigerate for at least 3 hours or overnight for the best results.

The next day, let the dough rest on the counter for 15 minutes before you begin to roll it out. Knead the dough on a glutinous rice flour dusted counter just until pliable. Roll the dough to fit into a 9-inch spring form pan with enough overhang to line the 2-inch sides.

Line the dough with enough parchment paper to cover the dough and have a 1-inch overhang so you can grab the paper after the crust has baked. Fill with a mixture of quinoa, lentils and rice. (I’ve found the mixture of the different sized grains make for a much smoother blind bake so the dough doesn’t get raw spots.)

Bake for 15 minutes. Remove from the oven and very carefully remove the parchment paper, being sure not to let any of the rice fall onto the crust. I like to immediately pour the hot grains into a large bowl or measuring cup so I won’t make a mess or burn myself.

Brush the dough with the following [egg wash]

Whisk the egg and the salt and then brush the dough. Return the dough to the oven and bake to seal the dough for an additional 7-8 minutes and the crust is uniformly golden.

In a stand mixer with the paddle attachment, cream the butter and the sugar together until very smooth. Add the almond meal and mix just until combined. Scrape down the sides of the bowl as necessary. Add the kosher salt and the egg and the egg yolk. Mix until smooth. Add the cognac.

Pour the frangipane into the tart crust. Smooth and level with an off-set spatula.

Bake the frangipane for 10-15 minutes and it’s just set.

Remove from the oven and then carefully remove the tart from the pan. Allow to cool completely on a wire rack.

While you wait for the tart to cool, make the raspberry compote.

Pour the sugar into a large saucepan. Add the lemon juice and stir so all the sugar is wet. Turn the heat on low and heat until the sugar is melted. Add the raspberries and then the zest and a pinch of kosher salt.

Heat over low heat for 15 minutes. Remove the fruit with a slotted spoon, then heat the syrup down for 10 minutes thick but not gelatinous. You want the syrup to run slowly in the pan. Add the fruit back to the syrup after it has cooled.

Spoon the raspberries over the baked frangipane.

Combine the sugar with the water in a saucepan and heat over medium heat until the sugar dissolves. If any sugar granules stick to the side of the pan, use a pastry brush to add them to the syrup. Heat to the soft-ball stage or 239°F. In the meantime, while the syrup comes to temperature, whip the egg whites with the cream of tarter with an electric mixer (I used a stand mixer) until soft peaks form. Between the bowl and the whisk, slowly pour the syrup into the egg whites in a thin steady stream, whisking non-stop until the egg whites have cooled and are very thick, about 10 minutes.

Transfer the meringue to a pastry bag fitted with a star tip. Pipe the meringue in rosettes over the raspberry compote.