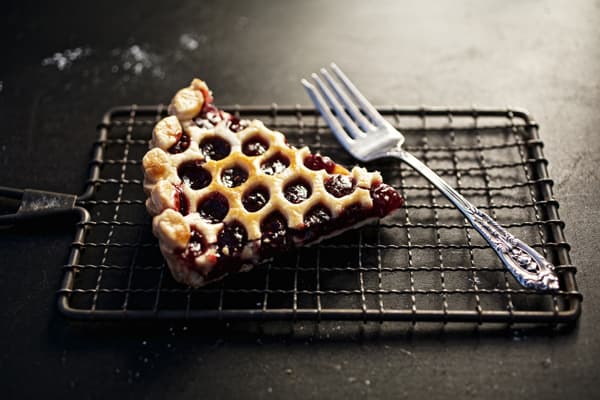 To say that the linzer torte is the first cake of kings is no exaggeration. Believed to be the oldest cake in the world, the first recorded recipe for a linzer torte sprung from the Admont, Austria in 1653, in an Abby of the same name. At least the recipe was found in the Abby’s library. Most food historians claim that the cake itself is actually from Verona, Italy and made it’s way north over time, but what makes this point so interesting is that Linz, Austria was founded by the Romans who originally called it Lentia. Records from as early as 799 AD have the city listed under the name Linz, so I think it’s safe to say that this ancient cake is indeed of Italian descent. If any of you have more details about the origins of this lovely cake, please do share it!

Traditionally made with a crust of butter, egg yolks, hazelnuts, flour, cinnamon, and lemon juice, for a supremely flaky finish, I was sure to hold true to this model and made my gluten-free linzer torte so that the ancient Romans and Austrians would be proud. I know it’s silly for me to call our ancestors from the 17th century “ancient;” more of an exaggeration, but is it a LONG time ago.

Anyhow, this is a fantastic torte and you can make it as deep or as shallow as you like. I went for a slightly lighter version, but kept the lattice topping the same. Many modern versions use nutmeg in lieu of the cinnamon, so I used both. Also, it is also a common practice to dust the top of the torte with confectioner’s sugar, but I find that the confectioner’s sugar makes the torte way too sweet; but by all means, if this floats your boat, I say, dunk your donut!

In the the bowl of your stand mixer, combine the gluten free flour blend with the hazelnut meal, cinnamon and nutmeg. Mix on low just to combine. Add the diced butter and mix on the lowest setting until the mixture looks like damp cornmeal. Add the eggs, egg yolk and lemon juice. Mix on high until the dough is very thick. If your eggs are large, the dough will be more sticky, so don’t be alarmed if this happens to you.

Transfer the dough to a counter that has been lightly dusted with glutinous rice flour. Knead just enough to shape the dough into a disk. Wrap in safe plastic wrap and refrigerate for at least 2 hours or overnight (up to three days ahead of time).

Next day, lightly dust the counter with more glutinous rice flour and allow the dough to sit on the counter for 15 minutes to acclimate slightly. Knead the dough till smooth. The dough will still feel very cold at this point. Divide the dough in half.

Roll out one of the disks and line a 10-inch tart pan. Roll the rolling pin over the top of the pan to trim off the excess. Line the dough with parchment paper that you have folded into a square first and then an additional four folds so you have a flat cone shape. Trim the fat end of the cone into a scallop pattern. This will enable the parchment to lay flat, decreasing the number of indentations in the dough from the bunched up paper. Fill the tart case with your pie weights of choice. I like to use a combination of rice and quinoa (50% rice : 50% quinioa). Having two types of grains of different shapes and sizes will give you an incredibly smooth tart case. If this process takes you a long time, I recommend putting the other disk of dough into the refrigerator so it doesn’t get too soft.

Par bake the crust for 15 minutes.

In the meantime, roll out the other disk of dough on a piece of lightly dusted parchment paper; make sure the dough is no thinner than ¼ inch. Take a diamond shaped aspic cutter and cut our a lattice pattern in the dough, being sure to make the pattern fit the tart case. Reserve the cut outs to line the crust with leaves. When you have finished cutting out, transfer the dough to the freezer to set for 10-15 minutes.